Let's recap based on all that we have learned over a period of time: The brain is an organ that serves as the center of the nervous system in human beings. The brain is located in the head, usually close to the primary sensory organs for such senses as vision, hearing, balance, taste, and smell. The brain is the most complex organ in a vertebrate's body. In a typical human, the cerebral cortex (the largest part) is estimated to contain 15-33 billion neurons

, each connected by synapses to several thousand other neurons. These neurons communicate with one another by means of long protoplasmic fibers called axons, which carry trains of signal pulses called action potentials to distant parts of the brain or body targeting specific recipient cells.

It's funny (and it's a shame) that we had studied all of this in-depth in 11th - 12th Class Biology, but remember none of it.

Physiologically, the function of the brain is to exert centralized control over the other organs of the body. The brain acts on the rest of the body both by generating patterns of muscle activity and by driving the secretion of chemicals called hormones. This centralized control allows rapid and coordinated responses to changes in the environment. Some basic types of responsiveness such as reflexes can be mediated by the spinal cord or peripheral ganglia

, but sophisticated purposeful control of behavior based on complex sensory input requires the information integrating capabilities of a centralized brain.

Recent models in modern neuroscience treat the brain as a biological computer, very different in mechanism from an electronic computer, but similar in the sense that it acquires information from the surrounding world, stores it, and processes it in a variety of ways, analogous to the central processing unit (CPU) in a computer.

, is a type of biofeedback that uses real-time displays of brain activity - most commonly electroencephalography

(EEG), to teach self-regulation of brain function. Typically, sensors are placed on the scalp to measure activity, with measurements displayed using video displays or sound. www.eeginfo.com

Electroencephalography (EEG - the recording of electrical activity emitted from the brain) has come a long way in the last 100 years, since doctors drilled holes in monkeys heads to attach sensors, and eventually glued contacts with cathode ray tubes to intact human skulls to map brain activity. They discovered that the brain emits oscillating signals of variable frequency, and the frequency of the oscillations indicates what's happening - at a high level - in one's mind. These "waves" are generally delineated into categories based on frequency ranges: 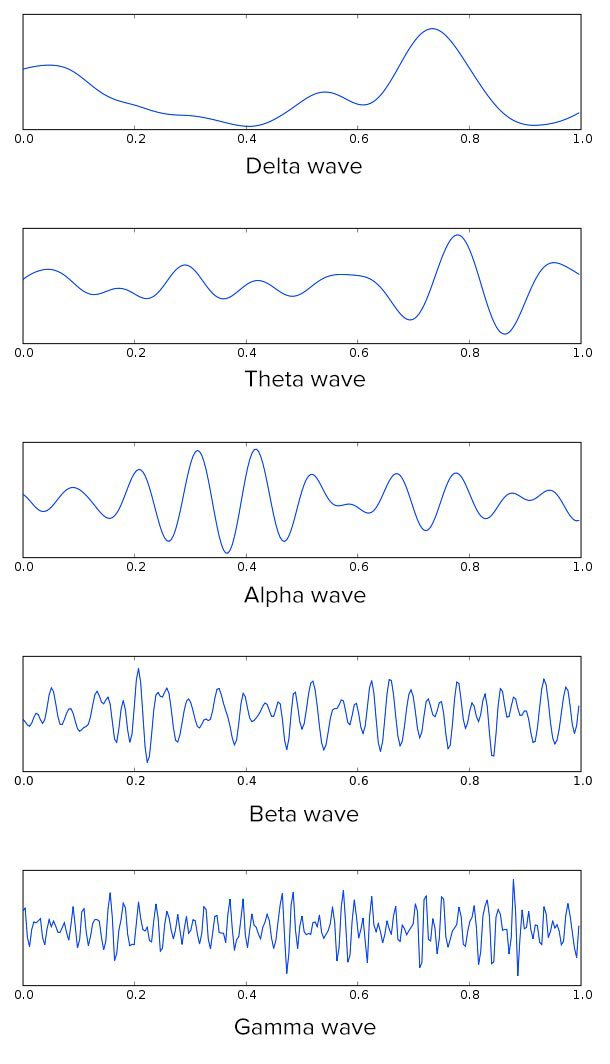 Alpha waves (~9-13 Hz):
→ Moderate
→  Indicate a relaxed brain state, what Garten calls "an open state of mind."
→  Helpful in calming down when necessary and promotes feelings of deep relaxation
→ Involved in bridging the gap between conscious thinking and subconscious mind
→ Imbalance leads to Daydreaming, Inability to Focus, Too relaxed, Anxiety, High Stress, Insomnia, OCD
→ Alpha Blocking occurs when we become too aroused or stressed, when beta waves block the production of alpha waves
→ Consumption of Marijuana leads to increased Alpha waves
→ Child's brain does not function at this state of consciousness

Beta waves (~14-30 Hz):
→ High (associated with high levels of arousal)
→ Indicate alert consciousness and fire up when you're actively thinking
→ High frequency low amplitude brain waves that are observed while we are awake. They have a stimulating effect.
→ Involved in Conscious Thought, Conscious Focus, Memory, Problem Solving, Logical Thinking, Writing, Reading, Socialization
→ Right amount of these waves help in focusing on and completing school / college or work-based tasks easily
→ Imbalance leads to Adrenaline rush, Anxiety, High Arousal, Inability to Relax, Stress, Daydreaming, Depression, Poor Cognition
→ Coffee, Energy Drinks, and various Stimulants have the potential of causing these waves
→ Child's brain does not function at this state of consciousness

The original purpose of EEG was the study of epilepsy. Over the decades, however, as computers improved, neuroscientists' increasing capability to process the enormous amount of data the brain throws off allowed them to experiment with EEG for other uses, such as attention therapy.

In his 2007 book, The Brain That Changes Itself

, neuroscientist Norman Doidge made mainstream the then recent (and surprising) finding that "the brain can change its own structure and function through thought and activity." As we once believed, our intelligence and tendencies are not locked in once we're no longer children. Once our brain was wired, it could still be rewired. This adaptibility factor of the brain is known as neuroplasticity

, which refers to changes in neural pathways and synapses due to changes in behavior, environment, neural processes, thinking, and emotions - as well as to changes resulting from bodily injury. The concept of neuroplasticity has replaced the formerly-held position that the brain is a physiologically static organ, and explores how - and in which ways - the brain changes in the course of a lifetime.

Anna Kucirkova came across my (this) website and sent me her article. Thank you, Anna, I am more than happy to link it here: Using Brain Plasticity to Supercharge Your Brain

You read above that the brain is termed as a biological computer, but does a computer work by itself? No. It needs power. I've worked in IT Software for 10 years, so here's the best analogy that I can give. Similarly to a Computer System, if the brain is a Computer, Thoughts are the Instructions. The Soul is the Programmer that decides what all is to happen within the Computer. Beliefs are the Operating System / Software Applications that run the Computer. The Soul / Mind controls the brain through Thoughts. The brain, in turn, controls every single function in the Body, including the glands, which are hugely responsible for one's good / bad health.

An imbalance in one's Mind (i.e. Thoughts) directly causes an imbalance in the amount of signals / triggers the Brain gets and gives to the various hormone-secreting glands / functions / organs throughout the Body. Therefore, staying too SAD for too long, or continuing to 'burn yourself' (emotionally) for too long, both cause an imbalance in your body.

, which is the hub of information, regulates one's sleep, alertness, and consciousness. The Soul or Mind produces Thought Energy which first reaches the Thalamus. If you're Stressed or Angry, you produce more than normal Thoughts, in number as well as intensity. This hampers the function of the Thalamus, which causes a disturbance in your sleep. GIF borrowed from Wikipedia.

Here's another example - in simplified words: If you have the habit of taking work SERIOUSLY (failing to know that you're supposed to be only SINCERE at work - neither devoted nor serious), you automatically take work or workload as a pressure onto yourself. Stress = Pressure / Resilience. Unless and until you have good resilience i.e. the ability to understand the Purpose of your Life (which you will read later), you will create a lot of STRESS within your mind. This stress releases the hormone Cortisol

in higher amounts in your body. While a balanced level of Cortisol in the body is necessary, its over-production results in the weakening of your immune system, increased level of sugar in the body, weakening of bones, lengthening wound-healing, and so on and so forth. You may read more about this from more accurate and medical sources. I leave that research to you.

Although I'm not a biologist or a scientist or even a doctor to know this 100% accurately, I certainly believe that hormones are responsible for one's health. Lower or Higher than the desired secretion amounts causes one to develop short-term and long-term illnesses. Therefore, it is said, that Happy people are Healthy people.

Having a Positive Focus every now and then
triggers the parasympathetic part of the nervous system
that eases stress.

According to some studies done at the
University of California, Davis, practicing GRATITUDE
causes a 23% decrease in levels of CORTISOL, the stress hormone.


A physician in Boston examined 25 people suffering from inflammatory disorders. A close check-up revealed that every one of them was holding a grudge. Negative thinking impairs the body, and also disrupts its ability to stay in its natural state of health.

Every single negative thought, according to me, is a sin and a torture to the self. This is the sin that makes one fall sick more than anything else. Of course, Negative Actions committed physically are ultimately the result of the negativity within, and they include Anger, Jealousy, Frustration, constant Irritation, Fear, Worry, Regret, or any and every other emotion that makes you feel bad. I have realized how I should stop being sinful towards myself. Here's my elaborate talk on YouTube: 'We Fall Sick Because Of The Sins We Commit'

So, instead of creating Negative Energy and causing an imbalance in your Brain and Body, and then consuming Medicines to bring the balance back in an unnatural (outside-in) way, can we do something to maintain the inner balance / mental balance and help the Brain release natural "drugs" into the Body and keep it healthy?

I received this information on Psychosomatic Disorders via someone, and thought of sharing it as a section here. According to Dr. Susan Babel, Psychologist, Emotions do Affect Chronic Pain. She says that chronic pain, beside physical injury, may be caused by stress and emotional issues. Let's take a look at what pain in a particular area of your body indicates:

Head:
Headaches can be caused by a stressful life. If someone has chronic headaches she / he needs to grab some time for themselves on daily basis. Relaxing may help you to relieve your body from the head pain.

Neck:
Neck pain implies the need to forgive. It may be to forgive yourself or to forgive some other person. It is very important to focus on things that you love about yourself or what others love in you.

Shoulders:
Pain in the shoulders is sign that person carries a heavy emotional burden. Shoulders carry everything. To solve this problem share the load with friends or family.

Upper Back:
Upper back pain manifests lack of emotional support. Probably the person is holding back feelings or doesn't feel appreciated. Just talk about your feelings with your partner or close friend.

Lower Back:
Pain in the lower back shows that the person has financial worries. Sit down and focus on managing money.

Elbow:
Elbow and arm pain signifies a lack of flexibility. Try not to resist the natural changes in your life.

Hands:
Pain in the hands may be caused by a lack of friends. Try to meet new people.

Hips:
Fear of change, moving or waiting on a big decision can cause hip pain. Make the changes step by step.

Knees:
Pain in the knee(s) is a sign of high self-esteem. Maybe you should try to do some volunteering work and remember no one is perfect.

Calves:
Calf pain is caused by stress, emotional tension or jealousy. Maybe it is time to let go the jealousy or any big stressor in your life.

Ankles:
Pain in the ankle means that you need more pleasure in your life. Try to enjoy the little things and every moment in your life.

Feet:
Foot pain occurs if you fight with depression. Depression is a specific disease, but for a start try to find a new hobby or just adopt a pet.

This is scientifically proven, so besides adopting medicines or consulting the doctor, give some time and observe your Thoughts, it heals you automatically

I have been experimenting with myself at a personal level, and results have been miraculous.