Awakening | Who are you?


If someone asks you your introduction, you would introduce yourself as a boy / girl, a son / daughter, a father / mother, a husband / wife, a student, an employee, a friend, a brother / sister, a Manager, a CEO, a film-actor, a director, a President, or your name itself (e.g. "I am Sagar") depending on the situation you are in. However, don't you think, these are actually the roles and tags that you have acquired and attached to yourself over a period of time?

We have been believing that we are this body (or the roles that we play), but when we say my body, it is understood that there is someone who is saying "my". When you get an injury, it's that part of the body having the sensation of pain, if you think deeply, there's something deep within your head that FEELS the pain. When you're happy, your body glows and pumps up, but there's that same thing deep within your head that FEELS the happiness.

There is indeed some "I" who is saying and feeling all of this. Plato (a Greek philosopher) was the first thinker in antiquity to combine the various functions of the Soul into one coherent conception: the Soul is that which moves things (i.e., that which gives life, on the view that life is self-motion) by means of its Thoughts, requiring that it be both a mover and a thinker. So, let's dig deeper into this.

Your body is made up of more than 50 trillion cells, but YOU are none of those. Within the assembly of bones, muscles and organs, YOU are the Energy that controls everything that is happening in your body and your life. Breathing, moving, talking, walking, or any other voluntary / involuntary function, everything is directly / indirectly controlled by this Energy.

This Energy is like a tiny point of light, present in the center of the forehead, behind the eyes, amidst the brain (in between the thalamus, hypo-thalamus, pituitary, and pineal regions) - illustrated in this wonderful photo that I found via Google. YOU are this point of light, also known as the Soul. Other words are aatma, Energy, being, consciousness, rooh (in Hindi). So, whenever you refer to "I", it is YOU the Soul. Your body is only your instrument (a package of more than 50 trillion cells). YOU think, YOU feel, YOU decide, YOU do (through your body).

Human Being is composed of HUMUS, means the body made of five elements (water, air, ether, fire, earth), and BEING, the Energy making the body move. YOU are that Energy. Perceiving the world through our five senses (see, hear, smell, taste, touch) has been so easy, fast, and habitual that over a period of time we have forgotten the Energy that is us that perceives, experiences, and feels. The Soul and the body are so seamlessly and wonderfully integrated that unless one is aware of their separate existence and identity, one tends to assume both as one. When you wear a ring, bracelet, amulet, contact lens, or a necklace for a long time, you start considering it an inherent / integral / inseparable part of you, and that's exactly what happens with us, non-physical beings. This isn't true with babies. They are more aware of their non-physical-ness than they are aware of their body. It is over a gradual period of time that they start considering their identity as a physical body. 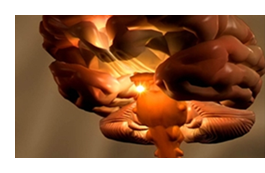 The Soul is NOT an actual point of light as depicted in the picture. It is not even a representation. It is only an easier way to understand that the Soul is not tangible / touchable / visible in the physical form. Non-physical meta-physical Energy has no shapes or forms. The Soul is Energy, and it is conserved / contained within the brain. Some people attempt an impossible act of trying hard to "see" that 'point of light' during meditation, and fail. Let's understand that the Soul is a meta-physical Energy, smaller than an atom, invisible through the naked eyes. It is indivisible.

How to believe in this?

We often talk about the Mind, which is also invisible. We experience the Mind each moment. Whenever we feel something, it's not the hands or legs that feel anything. It's the Mind that feels. When you eat something you like, it's not your tongue, but YOU feeling nice. When you sit at a sea-shore, it's not your eyes, but YOU feeling peaceful. When you're alone, you may not be talking to someone else, but just thinking Thoughts. If you can experience the presence of your Mind (i.e. your Thoughts / Feelings), you have experienced yourself as the Soul. Mind and Soul are one and the same - in terms of existence.


I am the Energy residing in this body
and expressing myself and doing what I want.

Mind, Intellect, Personality Traits are all nothing but the Energy, the Thoughts, and the Vibrations you carry and radiate around. We think Thoughts, we decide using the Intellect, and that makes our Personality, based on which we take Actions. Our Actions strengthen our existing Thoughts, or negate them, or create new ones. Our Thoughts become our sub-conscious Beliefs over a period of time, and this is how the chain continues.

What Is The Use of Knowing This?

Well, let's eat the other way around. Let's see what's the repercussion of not being aware of this. When you do not know that you are Energy, the following things happen:

1. You consider yourself a perishable body, and you do not know that you are the Creator of Life. You assume that only that which you can experience through your five senses (see, hear, smell, taste, sense) is real. As you continue to read, you will understand how untrue this is.

2. Since you consider yourself a physical body, you get bound by the limitation of looking at others' physical achievements, and consider those as your benchmarks. While it may be natural to want something that someone else possesses, pursuing it without being aware of your unlimited ability to create it abundantly into your own life makes you negatively focused on life. You forget that you are eternally expanding and evolving.

3. Since Energy is eternal and imperishable, you existed even before coming into this birth. So, you have done some creations in the past too, which are coming back to you in the form of your Karmas (more in "The Law of Karma" section), and when it's not so good, you get bogged down, instead of trying to change it.

4. Creation is one part, and the ability to change is another. Unless and until you are aware of your original self, you cannot know how you can change what you don't want in your life (more in "The Law of Attraction" section). Everybody talks about past birth Karmas, but you will now know how to deal with them.

5. The fear of death / perishing is dominant and is the primary deep-rooted cause behind every negative feeling human beings experience in their day-to-day situations.

6. How exactly you can CREATE and be, do, or have everything that you want remains simply unknown. That you are Energy & consciousness is one of the biggest facts that remains unknown. This is where COMPARISON (with another human being) creeps in. 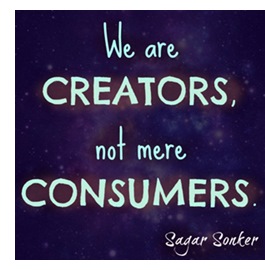 7. You remain under the illusion that you're a CONSUMER. When you consider yourself a perishable body, you believe that you have to perform physical actions in order to feel good. When you can, it's good. When you can't, it brings you sadness. Thus, your happiness becomes conditional. Conditional Happiness is the core problem in the world today. You remain unaware of the fact that you're a CREATOR, not a mere consumer. 98% percent of people - regardless of income - have concerns about outliving their money. That's because they are simply not aware that they're CREATORS and MAGNETS of abundant lives, and not mere CONSUMERS of it.

8. When you consider yourself a physical body, you look at the world with the consciousness of it being physical, and since everything that is physical / touchable / tangible is perishable, it becomes natural for you to develop Lackful / Shortage Consciousness within yourself, thus, creating Competitiveness within you. You, thus, get busy competing with others, instead of realizing that you can abundantly create in your own life, irrespective of what's happening out there in the world.

9. You tend to believe that whatever you have is because those around you also have the same. Or you should have what those around you have. A recent study has shown that 19 out of 20 people have no idea why they get up and go to work. They do so only because they observe others getting up and going to work.

. This is how one suppresses one's creative thinking.

The worst thing a "bachelor" can do is sit at office until late hours just because he has nothing to do after going home. This is a mentality of being unenthusiastic about life. There is so much scope for self-improvisation, but since this is what we call common, we have habituated ourselves to follow Mass Mentality, than our own Mind.

10. It is also seen that we use only 10% of our abilities / powers in life, because of the limiting beliefs we have. Rest 90% are dormant and latent. This is how we often lack creativity and rely upon Entertainment to feed the Mind. This only happens because of one's focus on the physical.

Stanford psychologist Carol Dweck found that some people have a "fixed Mindset" and believe that they cannot change their capabilities. Other people have a "growth Mindset". The growers believe they can work toward improving themselves. Dweck and her colleagues studied 373 students and tracked their academic performance from the beginning of seventh grade through the end of the eighth. They found that those with a growth Mindset think-I-can-think-I-can'd themselves to a rise in grade point average, while those with a fixed Mindset remained the same. It's also been shown that if, before taking an IQ test, people read an article saying that IQ is changeable instead of fixed based on genes, their IQ scores improve.


It is, now, time to shift our consciousness
and live life in the awareness of who we truly are.

We all are aware of the concept of the Soul. We have heard / watched about it. However, we did not know about it in the right perspective so far. We feel that the Soul is somewhere in the body, or the Soul exists after our death, or Soul means ghost, etc. However, we could not experience any of this.


Words are not important.
The awareness that you are Energy / consciousness is.


Say, 'I am a Soul' or 'I have a Soul'. When asked to introduce yourself in an interview, you wouldn't say, 'I'm non-physical consciousness present in this physical body, expressing myself based on my Thoughts and beliefs as Sagar'. They'll tear their hair apart! All that you would answer to 'Who are you?' at office is, 'I am Sagar'. What matters is that you are aware of your consciousness (Mind) and are in-charge of the creation of your own life. Words do not matter, so just get out of those unnecessary verbal and verbiage fights with yourself and others, especially after becoming aware of this truth.